Western Australia Giant Trees
​Yarri (Eucalyptus patens) is a fine formed tree with brown to grey furrowed bark and an attractive dark green crown, becoming silvery green with age. The yarri is also known as the Swan River blackbutt, but yarri is the preferred name as they do not grow along the Swan River, and many eucalypts are informally called blackbutt. Yarri came about this name as the Swan River Colony residents were using this timber from inland and were not familiar with its local Noongar name. Yarri grows within the Jarrah Forest roughly from Perth south in wetter areas usually in gullies. Its range is extensive, but it is not a common species. Yarri grows in pure stands, including patches of old-growth forest which is a magnificent sight, and reach their biggest size in the surrounding forests between the towns of Nannup, Bridgetown and Manjimup. Yarri has been logged heavily and has been used in the past for all manner of construction purposes, but more recently is favoured for flooring due to its attractive patterning of light, pinkish wood with dark brown highlights.

Yarri can be quite difficult to identify in the forest, being at times very similar to jarrah and especially marri in colour and appearance. One clue I look for when unsure myself is the direction of the grooves and furrows in the bark. Yarri tend to have horizontal grooves and vertical furrows, whereas jarrah bark is uniformly crisscrossed and marri is less uniform in pattern being scaly and flaky. Yarri bark is a lighter grey colour above the base in open forest but can be quite dark in dense forest. The base is often burnt from low level fires, larger trees having a green lichen covered base from low light which is common on all large WA trees species so a base identification may not be helpful. The fruit (nuts) of yarri are 1 cm in diameter, jarrah 1-2 cm and marri 3-4 cm, so failing all the above identification clues a careful ground search may be helpful or craning your neck up into the canopy may also help! Younger yarri foliage can be quite a dark olive colour where jarrah and marri leaves are bright green throughout their lifecycle, just less leaves with age. Older yarri do have a lighter, silvery sheen which can confirm yarri.
​
Most yarri which falls under protection is found in reserves and parks covering parts of the Jarrah Forest including Lane Poole Reserve and Wellington National Park. These forests still contain small stands of old-growth forest. In between Nannup and Bridgetown, there are a few protected areas of pure yarri, Blackbutt Conservation Park and Dalgarup National Park. Both however are quite difficult to locate but have spectacular stands of yarri. These areas are small and surrounded by much larger state forest, where some individual giants are protected as they are point champions, but their surrounding forest, however, is not.

Yarri grows best in wet conditions where the annual rainfall is over 1000 mm, and in alluvial loam rather than the red laterite soil preferred by jarrah. Yarri attracts a lot of wildlife due to their flowers producing large amounts of nectar. Additionally, the yarri's thick deeply fissured bark is utilised as a refuge for a variety of insects and reptiles which are in turn preyed on by birds and bats.

Yarri is a majestic tree, rare and a real treat to spot in the Jarrah Forest. There are 20 champion trees recognised on the WA significant large tree register, I've only measured five of the biggest on the list plus The Phantom I found within 100 m of The Looming Relic. I plan to measure a few more when I can. Most yarri are located in isolated forest requiring a hike with a GPS for a kilometre or two from an old disused logging road. Despite the harsh terrain, the reward is worth it. Indeed, on an all day trip seeing several yarri, my last tree, The Dominator proved quite memorable. After a difficult hike in which I struggled to even locate it, a shrub I was standing on snapped back onto my hand smashing the tip of my ring finger. It didn't help that I was holding my sturdy leatherman at the time jamming my finger in-between. Despite throbbing pain and blood I continued with my measurements for the next hour, the magnificent surroundings inspiring me to continue which included many red-tailed black cockatoos (Calyptorhynchus banksii) screeching. I did struggle carrying all the equipment back through the bush to my 4x4. At hospital the next morning, the X-ray showed the end bone was a bit crushed, but the ED doctor wasn't too concerned. The nurses were concerned about all my scratches and gave me a tetanus booster. I was happy though as The Dominator had exceeded 100 m³ making the yarri the sixth giant tree species from WA! 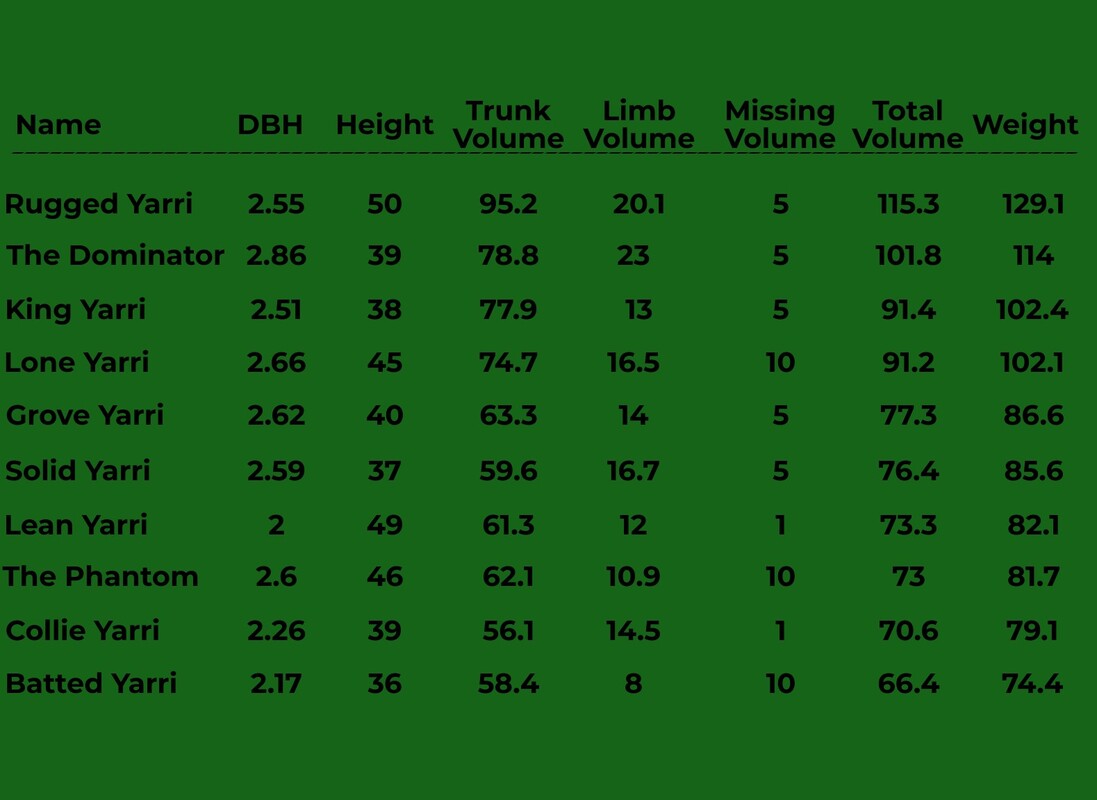