Western Australia Giant Trees
​Tuart (Eucalyptus gomphocephala) is a superb forest giant growing within the Swan Coastal Plain, an area of about 15000 km².  With distinctive rough, textured grey bark becoming darker on branches, tuarts have silvery olive green dense foliage.  In the past tuart habitat has been described as woodlands as it is more open than a forest, although these days it is simply described as tuart forest.  Early settlers first description of the tuart woodlands was of open forest with 'visibility clear for half a mile in any direction'.
Within the Swan Coastal Plain, tuart was originally estimated to cover an area of 1116 km², the tuart forest now includes about 300 km² with small remnant old-growth areas remaining.  Tuart grows best at its southern range at Ludlow 200 km south of Perth where the government has identified this region for special protection and rehabilitation.  Originally known as the Ludlow Tuart Forest, this narrow strip of land contains both national park and state forest surrounded by open farmland.  Before this recognition, much clearing for logging and grazing occurred as well as mining for titanium being approved in 2003 in State Forest number 2 despite public protests.  In spite of the extensive clearing over the years, I've found all the biggest trees exclusively in this protected area with remnant farmland giants, just outside the borders of Tuart Forest National Park.  The exception is the Grey Giant which is located only 20 km north and just part of the northern strip of forest that would have once contained the greatest unbroken stand of tuarts on earth.

Logging took place soon after settlement in the Swan River Colony, first in Kings Park then south around the Ludlow region named for Fredrick Ludlow who first settled in the area after 1834.  The famous Busselton Jetty was constructed for improved shipping access in 1865 right next to the Ludlow forest.  State forest 1 and 2 were purchased in 1919, and a mill was established in 1920.  Logging continued on and off until 1974 when attitudes began to change, and The Tuart Forest National Park was created in 1987.  Tuart wood is prized where great strength and durability is needed.  Such uses were in shipbuilding, wheel manufacturing, railway carriages and bridge supports among other general heavy construction.  Its wood finishes to a honey colour with darker interlocking grains providing tremendous strength.  The timber is very difficult to work on and is one of the heaviest woods in the world.
​Tuart is protected now with many parks and reserves around Perth containing old mature trees including Kings Park and Bold Park.  In Perth's southern suburbs the Beeliar Wetlands contains remnant tuart populations and fine specimens can still be found through Mandurah despite much land clearance and urbanisation.
Tuart grows on sandy, well-drained soil over limestone deposits.  Many tuarts were cleared to access Perth's limestone ridge for brickwork, and historic buildings were built using this material including Fremantle Prison and the Round House, WA's first building.
Tuart grows best with annual rainfall between 700-900 mm.  I've read tuart can live to 400 years old which I can't confirm but suspect this being highly likely.  The tuart forest have a rich and diverse habitat.  A 2014 study found nearly 600 plant and 113 animal species native in the Tuart Forest National Park.  This included many fungi species associated with nutrient turnover, essential in the low nutrient sandy soil.  Besides occasional jarrah and marri trees, tuart dominate the forest and are found in pure stands around Ludlow creating an impressive experience of grey toned trunks.  Important understory trees include banksia (Banksia), sheoak (Casuarina), paperbark (Melaleuca) and peppermint (Agonis).  The leaves of the peppermint tree being a vital food source for the endangered western ringtailed possum (Pseudocheiridae occidentalis) which live in the hollows of large tuarts.  The western brushtail possum (Trichosaurus vulpecula) is found in the highest densities at Ludlow.  There is a possum spotlighting trail walk at the Wonnerup Giant.  Other threatened species are the carnivorous brush-tailed phascogale (Phascogale tapoatafa), Baudin's and Carnaby's black cockatoos (Calyptorhynchus baudinii and​ latirotris) which rely on the large hollows in big tuarts for shelter and nests.  Also, the extremely rare white-bellied sea eagle (Haliaeetus leucogaster) nest in large tuart.  They were recorded over a hundred years ago at Fremantle when big tuart still grew.  Ospreys (Pandion haliaetus) are still seen around the Perth region, although they tend to nest in the tall introduced norfolk island pine (Araucaria heterophylla) as large tuart are rare.  The little eagle (Hieraaetus morphnoides) is an inhabitant of the tuart forest.  I’m regularly accompanied by one of these beautiful birds when I’m measuring a tuart.  I once came across a large southern heath monitor (Varanus rosenbergi) across the track at Ludlow, the day I found the Grand Giant, a spectacular tuart with a very wide spreading canopy, and the tallest tuart I've measured at 47 m tall.

Some challenges which face tuart rehabilitation around the Ludlow Tuart Forest are a proliferation of invasive lilies and water moulds causing dieback like in the Jarrah Forest.  Several new species of dieback have also been identified in the tuart woodland reducing nutrient uptake in their roots.  The western grey kangaroo (Macropus fuliginosus) particularly likes young tuart leaves which reduces new growth.  All these stressors, as well as 180 years of cattle grazing, are severely affecting tuart recovery in this unique forest.
Tuart trees are a unique and beautiful addition to the Swan Coastal Plain, they are big but rare trees around Perth becoming progressively larger and more numerous heading down the South coast, right along the main highway.  There's no register for tuarts, I suppose it's because they only live on the Swan Coastal Plain which is relatively urbanised and little forest management takes place, more urban planning. Nevertheless I have my own database and from years of measuring them I can say that the largest are indeed found in the Tuart Forest  National Park and surrounding farmland.  For many years I neglected hunting around Ludlow, thinking I had explored the area fully.  Since 2020, I've been back again and found over ten new giants all in a small section of forest and adjacent farmland in an area I'm calling Tuart Grove.  The small patch of forest within Tuart Forest National Park has not been logged and many old giants and fallen relics have made this area home over thousands of years.  These new finds have replaced all but the Wonnerup and Grey Giant from my previous lists, (the two tuarts I did not discover).  Indeed in 2022 I noticed a massive bleached white trunk which I initially thought were two tuarts close by in Tuart Grove.  When I arrived and saw a single solid bleached white trunk, I thought this tree could be the largest.  I named this tuart the Iron Giant, dethroning the Wonnerup Giant.  Driving down to the Ludlow Tuart Forest, I'm always excited by the experience.  I find it extraordinary that the main tourist road, Tuart Drive goes through the forest at highway speed, a challenging pace to appreciate these trees.  I'm not sure people realise that this forest is the last and finest stand of tuart forest left in the world. 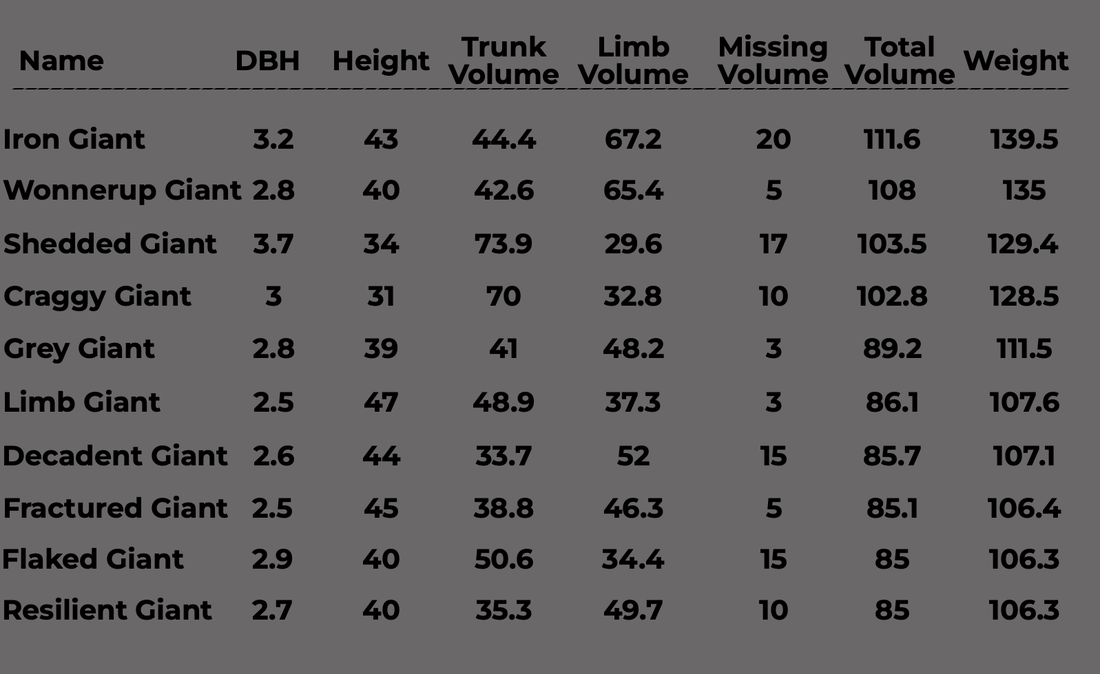