Western Australia Giant Trees
​Red tingle (Eucalyptus jacksonii) is a magnificent tree found in a restricted area of the Warren region, famous for their enormous buttressed base.  There are also two other species of tingle, Rate's and yellow tingle (Eucalyptus brevistylis and Eucalyptus guilfoylei) but only red tingle reaches enormous size.  The first national park in the area was set up in 1924, the region already noted for the ornamental red flowering gum (Corymbia ficifolia) and its high densities of unique orchids.  In 2004 the Walpole Wilderness Area was established as a biodiversity hotspot, protecting this unique habitat.  Information obtained from Walpole Parks and Wildlife estimate original red tingle forest at around 30 km².  About 20 km² remains, fully protected from logging and well managed by the department to preserve this unique habitat.  The red tingle forest was never extensively logged due to its tiny range and isolation despite red tingle timber being of exceptional quality, similar to jarrah but difficult to work with.  Their enormous size, often burnt out at the base would make felling them safely difficult.  Jarrah was much more abundant and easier to handle in the mills.

The small town of Walpole is where you head to start your tingle experience.  Busloads of tourists make the 1000 km, 15 hour round trip from Perth to the Valley of the Giants Tree Top Walk experience.  I like to make my way down through Pemberton to loiter around there first before heading to Walpole spending a few days cruising the deserted tracks hunting for giants.  There was previously a famous red tingle which I'll call Giant Tingle tourists over the decades would visit and photograph and often park their vehicle in the hollow at its base, such was its size.  By 1990 Giant Tingle had collapsed, red tingle have sensitive roots to soil compression.  There was also a massive increase in visitor numbers in 1990 as the interstate highway was fully sealed and domestic airline ticket prices dropped substantially through deregulation.  The government recognised the need for better conservation and a plan was envisioned.  In 1996 the area was reopened with the incredible 40 m high 600 m long Tree Top Walk on one side, and the Ancient Empire Walk on the other side with remnants of  Giant Tingle collapsed but still partially standing.  The main entrance with an eco-gift shop is in the middle.  Luckily another red tingle, Hollow Trunk was found by a farmer on his property in 1952 closer to Walpole.  The land was eventually purchased becoming Walpole-Nornalup National Park, and the short Giant Tree Loop trail was established and is a wonderful experience with Old Rusty on this trail too.
​The region's climate is warm and humid with annual rainfall between 1150-1250 mm but has been declining in recent years.  Red tingle grows best in well drained loam or sandy loam soils.  The trees can live to 400 years and are noted for their massive, usually hollow bases.
Some online and official sources cite that red tingle can reach 75 m in height.  This is vastly off, the source was a guess from a botanist over a century ago and it has stuck somehow.  I've measured around 50 of the biggest red tingle and the tallest I've measured with a laser is exactly 50 m, from an undamaged healthy specimen, most don't reach to 40 m.  Red tingles are also mentioned on several online sites as the largest Eucalyptus in circumference at BH (breast height, 1.4 m) due to the girth of Hollow Trunk at over 22 m.  Whilst technically true this tree is exceptional for a red tingle.  Mountain ash (Eucalyptus regnans) found in south eastern Australia are usually greater in circumference and there are several currently in Tasmania just over 20 m in circumference at BH and more historical images far larger even over 30 m in circumference at BH from Victoria in the late 19th century!  They can be double the size of karri and red tingle with El Grande, estimated at 439 m³ total volume before its demise in 2003, and the recently discovered Wayatinah Titan measured by Brett is around 460 m³ total volume making these eucalypts some of the largest trees on earth, certainly outside of California US.
​Red tingle also have hefty and often damaged branch structures adding to their overall gnarl factor, a tree term used to describe interesting growths, deformities and injuries in trees.  The general shape and appearance of a tree can be termed its character.  The more unusual the appearance the greater the character.  Red tingles have a lot of gnarl factor and character!  The crowns are generally heavily damaged on mature trees with significant broken limbs appearing like giant bones reaching up to the sky.  Their stringybark is a reddish colour with mature trees dotted with sometimes very large burls or other deformities on the trunk.  This is caused by extensive lightning strikes, fungal damage, and insect attacks.  The trees have evolved to cope with these hardships, and resilient old specimens have extensive damage from top to bottom, showing tremendous individual character and gnarl factor, some enduring beasts appearing more dead than living! 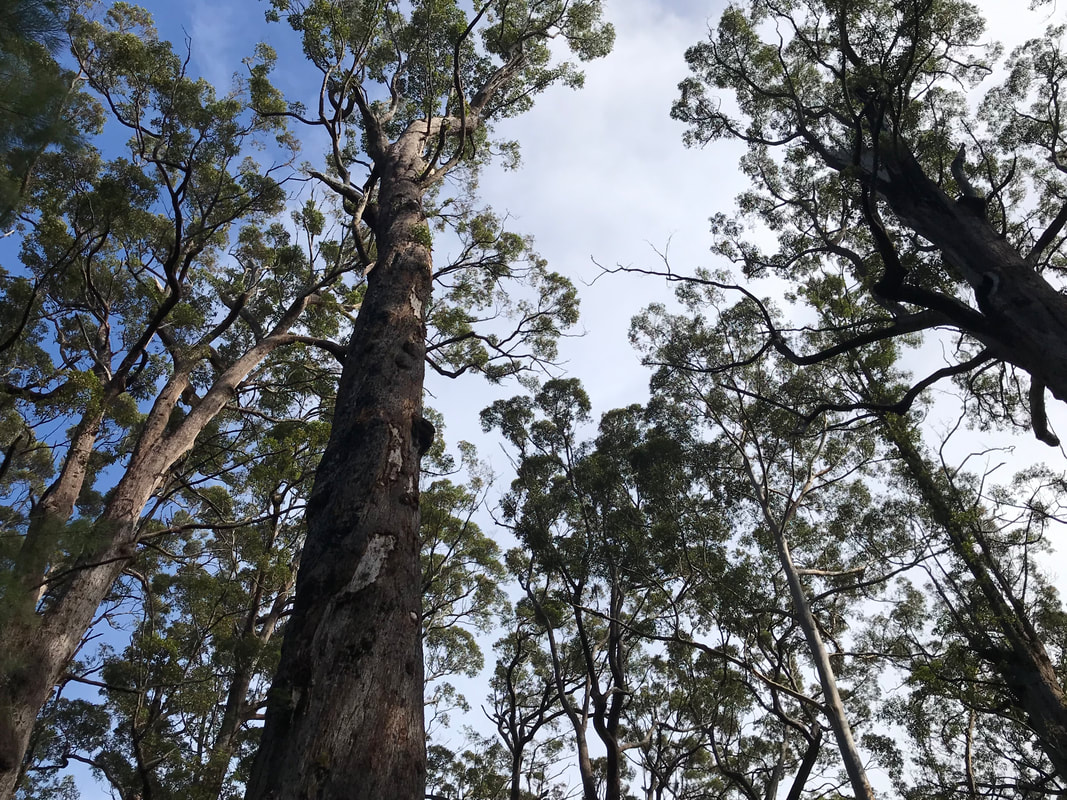 Hollows caused by burns or rot are traditionally restored in volume calculations.  The reason behind this that these injuries are  random acts of nature and may be restored.  This is normally not an issue, while many older trees do have hollows (which many animals utilise), they are small compared to the overall volume of a mature tree.  The problem with some red tingles is that their hollows can be utterly enormous, Hollow Trunk being the greatest and most famous example of this with the demise of Giant Tingle in 1990.  With around 115.5 m³ of empty space, or 53 % of its total volume burnt out.  All other red tingles I have measured have some sort of damage, but still retain the vast majority of their bulk as wood not air.  Old Rusty and Big Red, the next biggest have around 15 m³ burnt out at their base which equates to about 7.5 % of their total volume.
To restore Hollow Trunk’s missing volume gives it the most volume of all the red tingles I have measured and the second biggest tree in the Southwest after The Tyrant.  Some restoring involved recreating the full girth that Hollow Trunk likely had before it was burnt, from a measurable 22 m to a restored 25 m in circumference at BH.  I agonised about restoring its volume due to the vast amount of empty space and spoke to a few knowledgeable people about it.  We are all in agreement that when red tingle bases hollow out, they respond by enlarging their root system buttressing out to prevent collapsing.  This adds support and further nutrient uptake to fuel the extra growth demands.  In the end I decided to restore Hollow Trunk's volume as per the normal rules.  I suspect it's been burnt and hollow for many decades so was never quite this big before it was burnt, likely from a lightening strike.  It's certainly made up for its burn in character though!  The Pleated Lady (named as it resembles a pleated ladies skirt), is another tingle with a greatly expanded base is probably hollow too despite appearing solid all the way around.  This flaring is likely a similar response to Hollow Trunk but its hollowing is caused by wood rot, not fire.  Water leakage, fungal damage, insect attack or all of these would be the cause.  As stated earlier, I have found most of the red tingles on this list, the exceptions being Hollow Trunk which has been known for decades, and I was given instructions to the Pleated Lady on the deal I would not disclose its location.  Walpole Parks and Wildlife whilst not giving me their list did let me look at it and allowed me GPS locations to the two biggest tingles, one being the Forest Lord and the other I'm yet to see but it looked from the old photo similar to Hollow Trunk but barely alive.
So to sum up Old Rusty and Big Red are easily the biggest red tingles I have come across in actual wood volume and Hollow Trunk becomes the biggest in restored volume.  Enjoy them all!
​​
Historical Accounts


I have not come across a clearly bigger red tingle from the past than what is currently living.  The few older images of what I would consider a giant red tingle is of Giant Tingle with vehicles in it's hollow from previous decades in various states of deterioration.  You can tell the decade the picture was taken by the type of vehicle in it!  It was certainly gigantic and a near twin of Hollow Trunk.  I think if its volume was restored it would've been amongst the biggest.  I've done a rough volume estimation based on the below images.  I have Giant Tingle as about 170 m³ in trunk volume and 10 m³ in limbs for a total restored volume of 180 m³.  However Giant Tingle's trunk at 15 m is snapped off, it may have continued for many metres, potentially adding tens of cubic metres in trunk and limb volume, possibly matching Hollow Trunk!?
​
I have found some downed giants on hikes and some huge hollowed diameters, some around 15 m in circumference at BH, but not enough left to really tell how big they were.  It's likely due to the tiny distribution that when the first settlers came and started clearing, they left the very biggest which is what we currently have, Giant Tingle being the first large tree identified, and later Hollow Trunk.  Having said that, speaking to locals they believe there are giants still lurking out there!

These 2 images both show Giant Tingle.  Image 1 from 1963 shows almost the whole tree visible, the only full view I could find.  As can be seen it's even more hollow than Hollow Trunk!  Giant Tingle was around 6 m in DBH  and about 15 m in height where the trunk has snapped off where it looks around 2 m in width, about the same dimensions as Hollow Trunk.  It was slightly smaller at the base becoming slightly wider above 5 m where I record both trees at 3.3 m in width.  As can be imagined in image 1 Giant Tingle's trunk before being burnt would have been enormous perhaps with some massive limbs as well?  Image 2 is from the 1930s and gives a good view of the width of Giant Tingle at it's base.  It was a little smaller than Hollow Trunk but still pretty impressive!  Both images are reproduced with permission from the State Library of Western Australia. 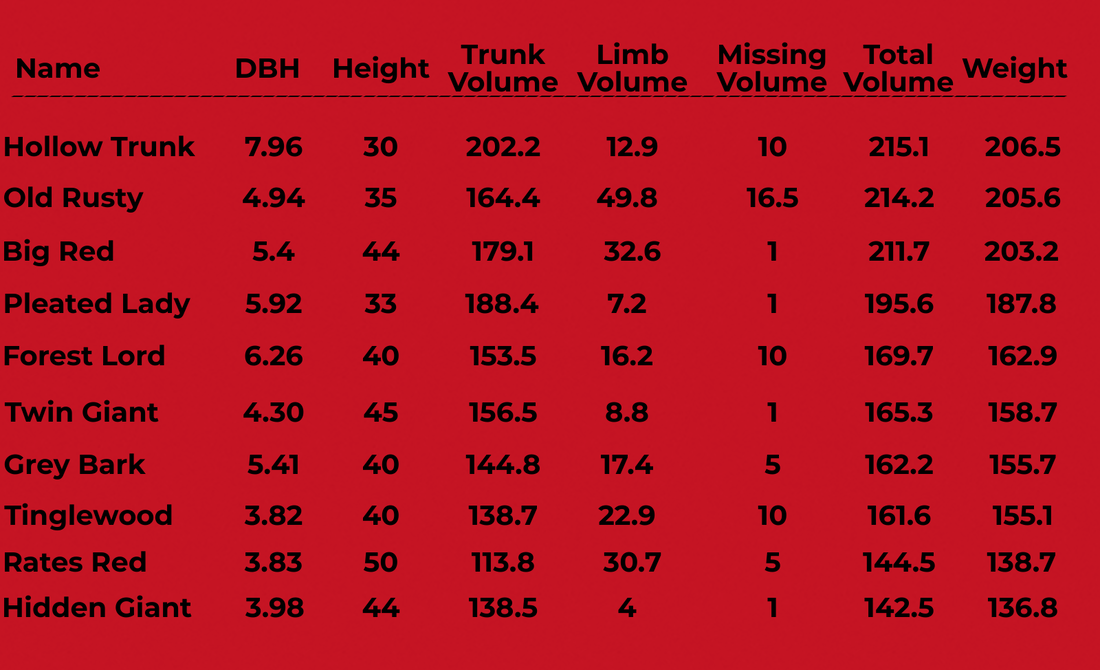