Western Australia Giant Trees
Marri (​Corymbia calophylla) is an impressive forest tree with a solid trunk and dense canopy famed for its large gum nuts.  It was previously classified as a Eucalyptus species but in 1995 was reclassified as Corymbia.  However, some organisations don't recognise this and still ally it with the eucalypts.  Marri is found throughout the Southwest region of WA co dominating within the Jarrah Forest.  Marri also inhabit the Tuart Woodlands, karri forest and tingle forests over an area originally around 68500 km².  It is still a common species, but large mature specimens are rare.  Marri wasn't historically logged as intensively for timber as other WA species, but instead cleared to open up the land for agriculture or used for woodchips.  Marri proved remarkably resilient to the usual logging methods, gelignite placed around the base and roots and ignited was found to be effective at felling them!  Some forest remnant trees have been left to provide shade for cattle, but many of these lone giants are succumbing to the elements faster than in a natural forest setting.  Marri wood is durable but tends to have structural faults which render it unsuitable for general construction.  It is, however, becoming popular as a furniture timber with light, honey-coloured wood that gives it unique and attractive vein patterning.  Marri produces high amounts of kino, a type of gum that bleeds out as a protective response to mechanical damage.  The kino has been used for medicinal purposes by the local Noongar Aboriginal people for thousands of years.  Also, kino contains tannin which was used to dye and preserve animal skins and was an important export from WA in the early 1900s.
Marri has been aged to 350 years old and grows over a wide range of conditions, but can develop into giant trees in wetter conditions ideally with a rainfall between 1000-1500 mm annually.  While marri can grow in poor sandy soil, it prefers laterite and alluvium soil.  Marri grow in association with jarrah throughout its range, but tend to develop into giants in karri loam soil alongside karri sometimes dominating them!  Indeed the biggest marri are all found in karri country with the Corymbia Giant at 71 m the tallest recorded, a height I was sure was wrong until I confirmed it with my laser in 2013!  Marri, like all WA tree species except karri rarely exceed 50 m in height.  The fruit of marri called gum nuts or locally honky nuts are large and well protected.  However, several birds have evolved to open the robust fruit to get to the seeds, such as the red-capped parrot (Purpureicephalus spurius) and the endangered Baudin's black cockatoo (Calyptorhynchus baudinii).  Old marri trees play critical ecological roles providing shade and nesting hollows for a wide range of animals, particularly WA's three species of black cockatoos.  Their scaly bark also provides habitat for a variety of insect life which in turn attracts predators.
​Marri is often overlooked compared to its more famous WA tree cousins.  Over the years I have grown in fondness towards them.  I particularly like old weathered specimens due to their craggy, warty appearance and gnarl factor.  These beasts are often partially burnt at the base with kino bleeding out from many unknown sources with multiple trunk burls.  Often their bases are rarely buttressed, and their trunk barely tapers, even when limbs emerge, it's quite remarkable.  They have heavy, arm like limbs reaching up and over then nearing the ground, like huge monster fingers from a fairy story. I have named some to match these characteristics! 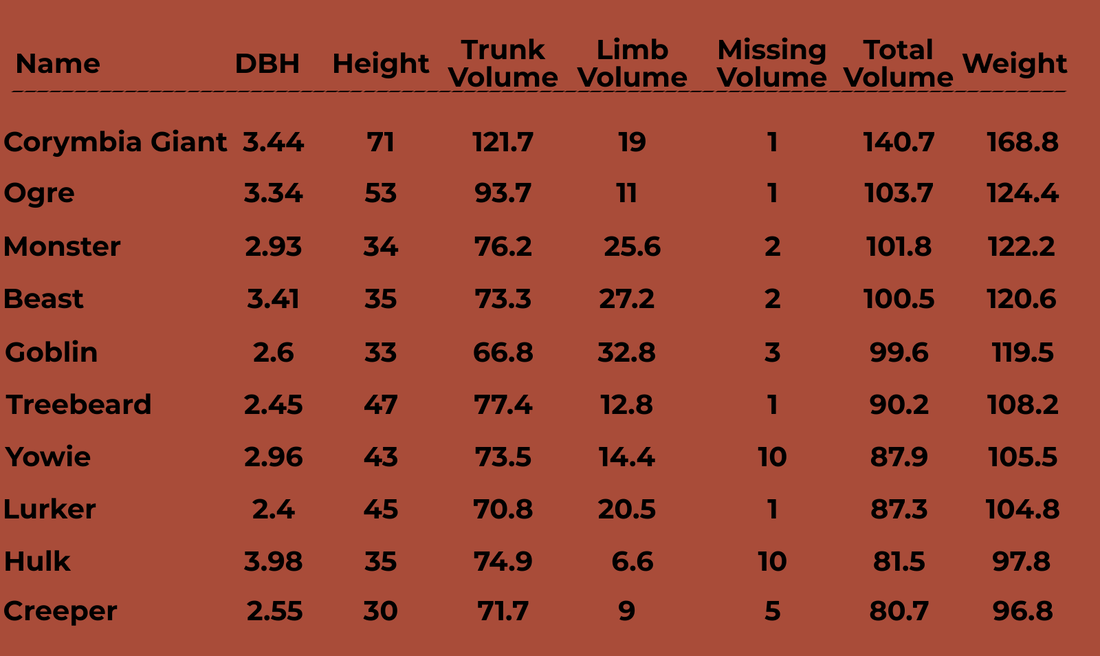