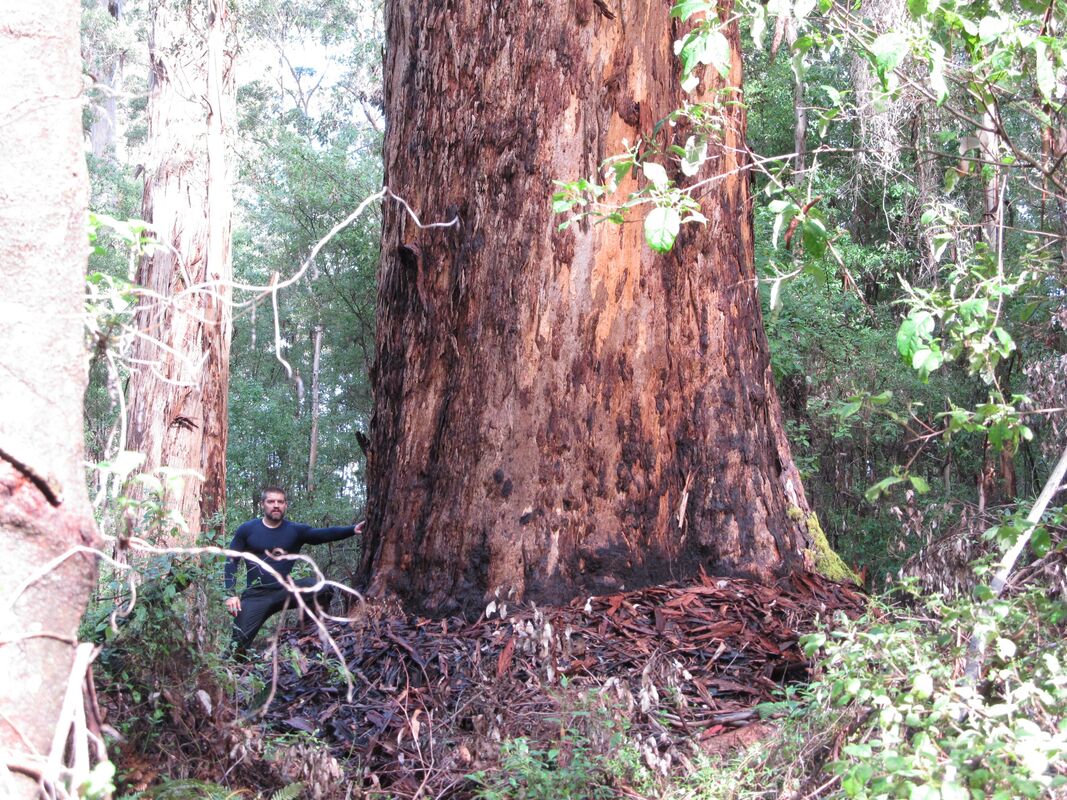 Our family would make regular trips to the watershed forests surrounding Melbourne. I remember gazing up at the mighty mountain ash (Eucalyptus regnans) trees located there, imaging how big and tall they once reached before the logging days.​ Perth, on the swan coastal plain was dry and sandy. The tuart (Eucalyptus gomphocephala) seemed the largest trees with the famous jarrah (Eucalyptus marginata) and marri (Corymbia calophylla) trees the next biggest. They were all smaller than the river red gums (Eucalyptus camaldulensis) let alone the mountain ash (Eucalyptus regnans) back in Victoria. The locals would tell me how I had to visit the karri (Eucalyptus diversicolor) and red tingle (Eucalyptus jacksonii​) forests down south, 300 km to 400 km away from Perth, they were the biggest trees. But were they? There were no books to prove this. Around 1995 I convinced my parents to make the trip with me as a guide after studying some maps and we headed south first stopping at Manjimup to inspect the well known King Jarrah Tree just outside the town. At Pemberton I climbed the famous Gloucester Tree while my parents looked on. We found all the popular tourist spots but no specific data on size which was a disappointment for me. The karri were incredible trees however, real forest giants.
​
Our final destination was Walpole to see the red tingle. We were all mesmerised by these amazing giants with huge bases and limbs reaching over the track with the giant tingle tree, Hollow Trunk a dominating experience. I however was transfixed at a giant viewable from the car park I thought was bigger, I would later name this tree Old Rusty. My mum and I soon afterwards went south to the Ludlow Tuart Forest 200 km from Perth to view the unique tuarts. My older sister helped me identify the difference between jarrah, marri and yarri (Eucalyptus patens) as she had actually studied trees at university as a landscape architect. My younger sister accompanied me on numerous trips too, some down south often running in front of our little hatchback removing debris off the track (we did take turns) and analysing with me how fast we needed to drive downhill to get up the other side! I began to spend more time exploring all over the Southwest searching for more giants, penciling notes on my map of tree volume estimations and forest conditions.
A LITTLE ABOUT TREE SIZE
​Big trees are determined by size, volume in fact.  This is the factor which identified the giant sequoia (Sequoiadendron giganteum) General Sherman as the worlds largest tree in a 1931 contest between Californian counties and from then on volume became the gold standard for size.  However, this is a difficult and complicated series of measurements, rarely done except in the forestry industry.  The 4 giant sequoia trees measured in 1931 by the Jourdan Team of engineers took a week to calculate their volumes!  Old photographs sometimes show white chalk written on logs used to record the volume of these downed giants.  I collected most of my early volume figures from logging sources in the United States, New Zealand and Australia.  For over twenty years I've been hiking in the WA forests looking for living giants.  This area known as Southwest Australia is a biogeographic region noted as one of only 36 biodiversity hotspots around the Earth.  Considered significant for its high variety of life and under current threat from human habitation.  At around 350000 km² the region is huge but the big trees only grow in an area about 70000 km² or 20 % in the south west corner of the southwest.  The climate for this region is Mediterranean, dry summers, cool wet winters.  All the trees listed on this site are endemic to this region and are Eucalyptus and the closely related Corymbia.  There are six giant trees in the South West of WA, bigger than all the other species by quite a bit and all exceeding 100 m³ in volume, an informal definition for a giant tree.
Most trees listed are from old WA forestry records not normally obtained by the public.  I was fortunate to be given a comprehensive list many years ago by an officer in the town of Manjimup.  He explained that only the biggest tree for every species in every forest block was recorded using the American Forests points system, a series of three measurements to roughly determine tree size.  This points system has been used in forestry around the world for years, in 1940 American Forests started annually publishing its list of champion trees with the most points.  Whilst a handy tool to gauge size, the points don't correlate to volume.
In WA, a forest block is 100 km², 10 km by 10 km.  Surprisingly there are up to 30 trees for some species on the list, the South West being quite large.  I've found several giants myself including all the tuarts and most of the red tingles as I was not allowed that list!  I've also found 4 karri, 4 marri and 4 yarri currently in the top ten with at least another 100 large trees missing out!  In 2012 I finally purchased the equipment I needed to measure volume costing about US$2500.  If you want a job done sometimes you have to do it yourself!  I went back to all the trees I felt needed measuring and to the biggest on the WA list.  I've since measured over 200 giants in this special region and present the data here.  This is how my quest to find giant trees in Western Australia began, and it's still going!

Things you need to know

Before you navigate my site, there are terms and phrases you may need to know about, such as how I have calculated the trees dimensions and volumes, and general tree terminology.  Click here to view this information in measurements.  All species names are headed under their wonderful local names, derived from the aboriginal Nyungar language.  I would also like to acknowledge all the foresters from the past who probably protected the giants currently standing.  I’m sure there was no official protection a century ago for these individual trees when huge areas were earmarked to be logged.  Yet we have individual trees probably the biggest recorded still standing for future generations to enjoy.  I would also like to acknowledge my tree hunting friends Brett and Derek (their websites listed below) who have been encouraging me to create a webpage on WA giant trees for years now.  In view of the devastating 2019-2020 Australian bushfires I really wanted to get this webpage up and running.  With human influenced climate change only likely to increase the chances of bushfires we must protect and appreciate what we have, nothing lasts forever.
I would also like to to take this opportunity to thank all my friends and family who have accompanied me on my many tree adventures, and lived to tell about it, sorry if we got lost!  Thank you Reuben and Rowan who have helped me and my amazing wife Brigitte who has allowed some family holidays to accidentally turn into tree trips mysteriously.  Thanks for pulling out ticks and thorns over the years and putting up with injuries sustained in the line of duty!  She has really set up this site for me to develop, I really couldn’t have begun without her.

Other tree sites worth visiting