Western Australia Giant Trees
Jarrah (Eucalyptus marginata) is the most famous WA tree, noted for its fine timber qualities.  With attractive reddish-brown stringybark and a full canopy of bright green foliage, a grove of old, undisturbed jarrah is a beautiful but rare sight.  The Jarrah Forest is an Australia bioregion, originally some 50000 km².  Remaining stands of old-growth forest is however, much less at around 2500 km² scattered widely over its former range.  Jarrah also grow on the Swan Coastal Plain and the Warren region along with marri, for an original total area of around 72500 km² with giant trees scattered widely through out this range.  Most old-growth jarrah remains in state forest unprotected from harvesting, and there are no national parks with extensive old-growth forest.  Initial attempts 100 years ago to preserve areas as national parks were unsuccessful with the government changing reserves to state forest for timber harvesting!  This practice continued for decades until the Forest Department began setting aside small areas for conservation and recreation from the 1960s onwards.  Although government promises over the years to ban old-growth logging, legislation has quietly changed terms, and old-growth logging continues despite public protests.  Challar Forest was logged in 2014 revealing 400 year old jarrah to be used for firewood and woodchips, creating anger within environmental groups in WA.  The tiny remaining patches of old-growth jarrah it seems are too valuable to protect.  However in 2022 the government announced plans to halt all old growth logging in Western Australia by 2024.  Details are still as yet to be decided and old growth clearing and mining are still allowed but this is great news.

There are hundreds of historic jarrah images depicting life around the mill of the early settlers and later of the logging era.  Very few large jarrah trees are recorded however.  The image below is by far the biggest jarrah tree I could find from the online sources.  Many years ago I visited the state library and saw many images of what I would consider as giant jarrah.  Those images are still only viewable at the library at this stage.  Some are likely of current giants still with us, but were photographed when they were first discovered.  Another trip to the state library may be in order to show the biggest giants of the past I can find. 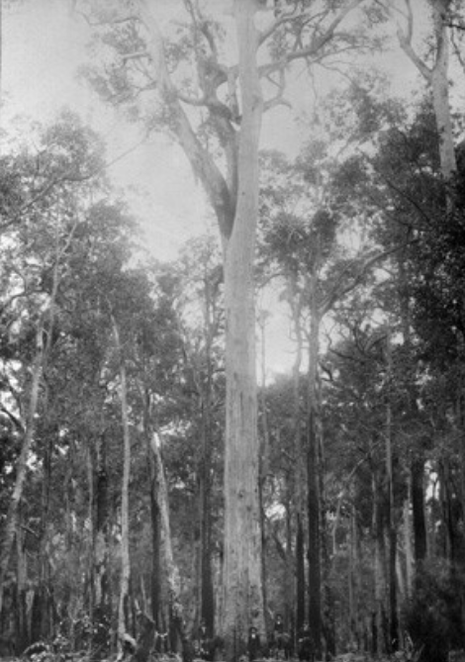 This giant near the town of Greenbushes was photographed in 1918 shortly before I believe it was logged possibly clearing land for ongoing mining operations begun after tin was discovered in 1886.  I estimate the trunk at 65 m³ and limbs at 15 m³ for a total volume around 80 m³.  There are 3 people at the base if you look carefully!  This would put it into the top five for volume.  Image is reproduced with permission from the State Library of Western Australia. 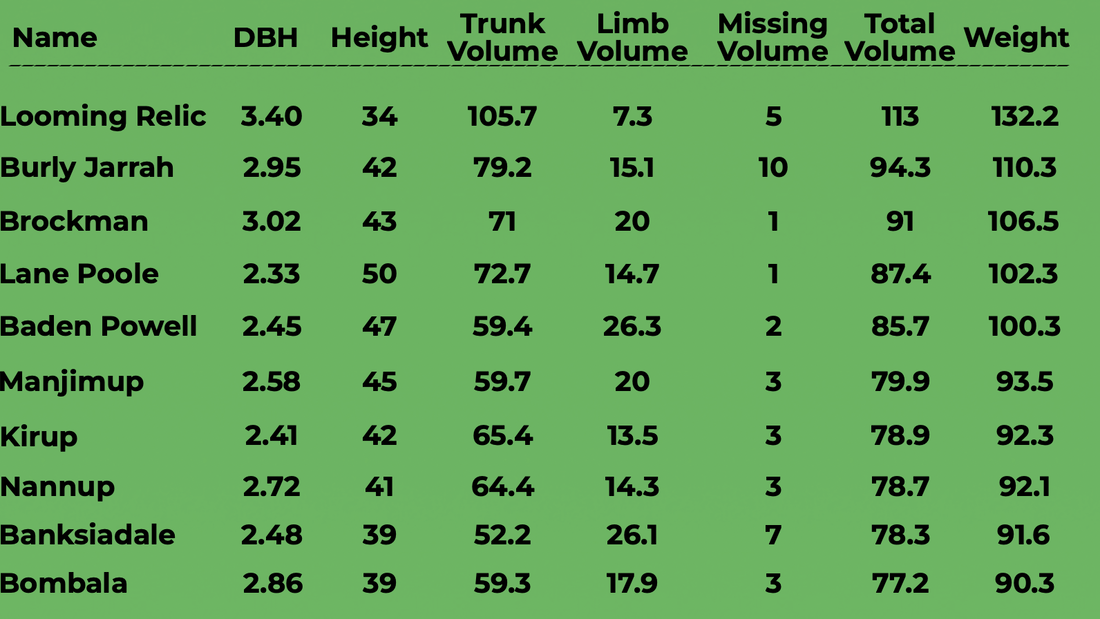