Western Australia Giant Trees
​Karri (​Eucalyptus diversicolor) is a beautiful, tall forest giant found in the Warren region near the southern coast of Western Australia (WA). The Warren region was named after the Warren River and created to encompass the karri forest although a few remnant populations exist just outside the region. The area at around 8500 km² is recognised internationally as an ecoregion, high in natural biodiversity. The karri forests are estimated to have covered an area of around 2000 km² within this region once. Estimates of old-growth forest remaining is about 400 km², the largest stand being Warren National Park established in 1977 at approximately 30 km². This park is very special and lucky. When walking in from the main carpark, the main walking track for a short section is unnecessarily wide, a very unusual feature for a hiking trail. While walking the track with a friend, we both came to the conclusion that it was going to be a logging road. We think it was spared and preserved simply due to its incredible beauty. Karri are unmistakable when mature, the only giant gum tree in WA with smooth bark except around the rough base. Their huge creamy grey trunks reaching up to the sky and when they are shedding bark other colours such as shades of yellow and pink are visible. Karri also have fewer but larger limbs than their eastern state Eucalyptus cousins with the Hawke, Tyrant and others having multiple limbs around 1 metre in diameter.

Karri was extensively logged in the past for the high quality timber and the high quantity of wood available per tree. Old-growth karri is still logged like jarrah despite a public perception that this practice was stopped years ago. Indeed in 2012 karri collected from a timber mill was carbon-dated to nearly 600 years old, double the age karri was thought to reach. This finding was disputed by the mill manager but the head tester reaffirmed the findings. This prompted 27 environmental groups to protest for complete protection of the karri forest. This wood was destined for woodchips and paper production. In the past, karri timber was used for heavy construction purposes. Despite most of the karri forest being logged and cleared for pasture in the past, it grows back well not needing seeding, unlike most Eucalyptus. There are several abandoned farms from the past now covered with sizable karri. Large areas once logged have been protected for conservation and feature heavily in tourism brochures. The town of Pemberton is an excellent place to begin your karri adventures as it is ideally situated near national parks and recreation sites.
Some of the eight original fire lookout trees built between 1937 and 1952 have become tourist attractions. The famous Gloucester Tree located at Pemberton was constructed in 1947 and at 61 m tall is the only original tree left which you can still climb! The other climbing tree named Dave Evans Bicentennial Tree is found in the Warren National Park was built for tourists celebrating Australia's bicentennial in 1988. At 75 m tall to the top it is the worlds tallest lookout tree. Both the Gloucester and Dave Evans Bicentennial Tree have steel pegs and lookout cages which are checked regularly for weaknesses. Though they are large mature karri, they are about half as big as the biggest karri but around the same height. A windy day at the top of either can be an uncomfortable but memorable experience if you're not used to being blown around uncontrollably up a massive tree!
Karri is often mentioned in texts as being the second tallest Eucalyptus after mountain ash. Although I would like to agree with this statement this is not the case. There are a few other Eucalyptus species in Tasmania which exceed karri reaching to 90 m measured by laser. Karri is actually about the sixth tallest Eucalyptus although probably the second tallest on mainland Australia after the mountain ash (Eucalytpus regnans) of Victoria. The tallest mountain ash in Tasmania, named Centurion reaches to over 100 m tall, I know because I’ve measured it with a surprised Brett and ABC film crew confirming this! Brett had previously climbed Centurion and accurately tape dropped a height of just less than 100 m, it had grown.
The karri tree grows in a soil classified as karri loam which is considered excellent for grazing. Most of the karri loam content is bark that has shedded from trees, decaying over thousands of years. Annual rainfall is 900-1300 mm. The karri forest has a dense understory with 2000 plant species growing under its canopy, as well as an abundance of animals, insect life and 150 bird species. I found a wedge-tailed eagle (Aquila adax) primary feather once measuring a giant karri in the Hawke Grove, an incredible patch of old growth forest I named for the Hawke Tree. I took it back home to the delight of my family and named the karri I was measuring the Eagle Tree. On that same trip I was measuring a tree I named the Moss Karri due to it’s base but I was being distracted by a regular shuddering sound. Every five minutes I would hear grinding sounds followed by a pause then the big shuddering would occur. I reasoned that this may have been going on for weeks or months so continued with my measuring. After only a few cycles of this a tremendous rolling crash filled the air. The crash lasted around ten seconds and was overwhelmingly loud. I couldn’t see the falling giant despite the deafening sound. I continued with my measuring then set off in the direction I thought it occurred. I didn’t find the downed karri but I returned a few months later and found a huge downed karri I named the Fallen Beast. I believe it was probably the tree which fell that day. I can also confirm that if a tree does fall in a forest, you can hear it, and it’s loud! Many people admire the majesty of giant karri trees lining the highways of the South West, certainly adding to their road trip experience. I myself am always excited whenever I enter 'karri country', knowing that a new adventure is just around the bend.

The moment I received my dendrometer, laser and GPS the first thing I did was to head south to Larkin Road and the Hawke Grove to measure the Hawke Tree and other large karri nearby. This giant was found in the late 1970s and had a track and large signpost built for what Parks and wildlife believed was the biggest karri. The signpost had long been removed but the old trail was visible but soon it too disappeared but I found what I thought was the Hawke Tree. I hadn't been there for 5 years and the track was totally overgrown for the final kilometre so I was bush bashing carry my heavy, bulky equipment. After re checking older pictures of the Hawke Tree I realised I had found a giant I remembered off the original track years earlier. My tree hunting friend Brett who had also spied this giant in the 1990s on route to the Hawke Tree confirmed my error with his old photos! Eventually I found the Hawke Tree and to my surprise the new giant beat it out for size. My wife Brigitte named it The Tyrant as it was not a benevolent ruler, refusing to give up its secrets, although to be fair it was all truly worth it!

There is a report from 1921 of a fallen karri measuring 100 m long, but I don't consider this credible. However, an 87 m tree in Pemberton in 1901 has been recorded which could be possible although no other information about this tree exists. Many publications list the karri as reaching 90 m tall, and I suspect the Pemberton tree is the source of this figure, but rounded up to 90 m. Stewart's Karri near Manjimup was one of the potential fire lookout trees found by Don Stewart in the 1940s. Not selected due to being located in a valley it was recorded at 85 m tall pre laser technology and has been known for years as the tallest karri. Brett found it in 2000 and recorded 80 m with his laser. I have made several efforts to locate it but have failed to do so (no GPS co ordinates). I've seen some pictures of it, and it's not one of the biggest. The tallest trees are usually not the biggest as they are younger with less crown damage and in the Stewart’s Karri protected in a valley. With luck, I'll soon try to find it, and I can verify its status. I have measured three karri that were listed as over 80 m tall, pre laser technology which has low accuracy. They are all around 75 metres, and I suspect they were never 80 m as they all still have intact crowns. I've probably measured around 10 karri over 70 m tall in total. These are the tallest karri I have measured.
There is surprisingly few historic karri trees recorded and photographed. Most past images of karri understandably involve human related activities showing how downed karri were transported to the sawmill.
The biggest historic karri I have come across is a picture taken in 1901 from Karridale, an area now almost devoid of karri. Named King Karri a postcard was also sold stating the trees dimensions as 73.8 m tall, and 3.9 m in DBH. The terrific photo displays the tree from some distance showing the main trunk terminating with three large limbs emerging around 40 m where it looks around 1.2 m in DBH. Some forced perspective may be involved here making my estimations a little off, but I've roughly measured the trunk at 160 m³, nearly the same size as The Tyrant and Hawke Tree. Limbs are more of a guess but the three huge limbs are around .8 m in width could have been up to 10 m³ each. There is also a picture of what looks to be the base of King Karri about to be felled.
The only other great old karri picture that I am aware of rivalling the current champs is from the Frankland River region, near Walpole, dated around the 1920s judging by the fashion. Named the Boxall Tree I recently learnt from Walpole resident and local historian David that it was a tourist attraction best visited from the Frankland River. The ferry service stopped probably around the great depression era and the tree was forgotten about, presumed to have fallen. In 1990 David and some friends dove into the forest to try to locate it and they succeeded, the tree was still alive. In 2020 he went on another trip to check its status and it was found to have fallen over recently, regrettably before I knew it had survived. The giant tree, 4 m in DBH was the size of the Tyrant and Hawke at the base but had lost its head by the time it was originally discovered so its true height will never be known. However at 5 m the tree was 3 m wide, and another photo I've found shows at 10 m it was still 2.5 m wide, still slightly wider than both The Tyrant and Hawke tree! In fact in the other photo it is described as a red tingle! Karri in this region are considerably shorter than their western cousins rarely over 50 m tall. It’s reasonable to assume the bole height was not as tall as the current champions which have 40 m bole heights. Next time I’m
in the region I’ll try to locate the fallen Boxall Tree and do a bole and volume measure to see how it stacked up. 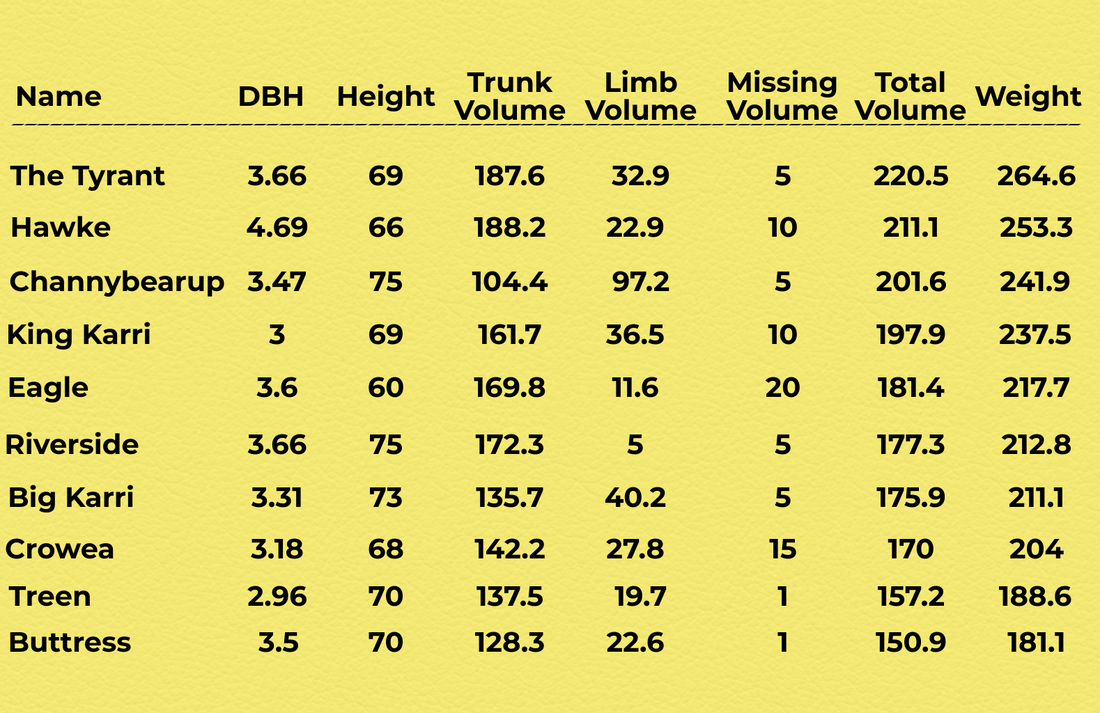